skip to main | skip to sidebar

This Is Apparently Where I'm Putting My Impressions of Beatles: Get Back

I have been a Beatles fan since I was a kid even though they broke up before I was really sentient. Certainly I know the officially-released music cold, and am more than conversant with the most commonly-bootlegged songs, most of which made their way onto various Anthology and/or Super Deluxe anniversary re-releases. Having said all that, there are dozens if not hundreds of people and blogs out there with more informed takes than what's seen below. Not that that is going to stop me. Note that I haven't actually read any of these takes other than one from They May By Parted, which agrees with one of the points I was already going to make.

With all of that, I've definitely been influenced by They May Be Parted (written by my brother!) and more lately by the first few episodes of the Another Kind of Mind podcast, which has definitely led me to look at Paul in a different way than I had been.

Soundcloud Site, and What I've Been Putting There


I have given in to the inevitable, and established a Soundcloud site for the music I've been putting here. I don't anticipate it will lead to any change in posting frequency (or infrequency) here--I had originally hosted the files themselves at MIT, then on a Google Drive site, now they'll be on Soundcloud (or at least the new ones will).

I've got five tracks posted right now, one of which has already appeared here as the Inevitable Found Wanting Support Live Set. The others currently posted as May takes over from April are:

Canon Romance: This one also sort-of appeared here, in solo acoustic form not long after it was written. Here it's been fleshed out with the rest of the Gedankenband, including a little intro. I was fighting a cold so it's somewhat more nasal than it might be, I'll certainly revisit the vocals before it gets an official release.

Let's Go Out (While We Stay In): I've moved my NaPoWriMo output to Twitter, but some of what I've written has ended up here, anyhow. I had a day when I set out to write song lyrics, and the relative novelty of the coronavirus response led me to write this relatively light-hearted song. I'm likely to pursue it for the next album, if I can get a Gedankenband arrangement that works.

Bought and Sold: Another NaPoWriMo product, though I'd written the first verse last summer. I'm pretty happy with this one, I don't tend to write a lot of lyrics like this, though I do write poetry like it a lot, I think...

Stormin' Gorman: I suppose it's fitting that so many of these have NaPoWriMo connections. This one started as a poem I wrote during my very first NaPoWriMo, when I was writing poems about baseball. I'm not sure why, but it was going through my head and struck me as something that could be set to music relatively easily (if not necessarily relatively well).  I don't know if this one has a future, but I could see it making it onto the next album (or the one after)...
Posted by Andy at 3:05 PM No comments:


When the Gedankenband last released an LP back in 2016, I recorded a few songs from it live and unplugged in support of it.  Since we've just released the Found Wanting EP (available on Bandcamp, Spotify, Amazon, Apple, etc.), I thought I'd do the same. :)

It's live, solo, and unplugged, and has three songs from the EP (The DART Song, "All Yours", and When We Look Back To Now) and one oldie ("(Good Luck with the) Woman of Your Dreams", from Not For Having, But For Tasting. 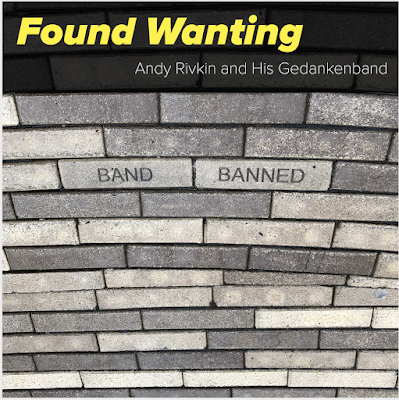 As previously promised, the newest release from the Gedankenband, the 5-song EP Found Wanting is now available for download at Bandcamp! (Click here: https://andyrivkin.bandcamp.com/album/found-wanting)  The downloads are "name your own price", which includes a free download if you are so moved.  Thanks to Christine Rueter for the amazing cover art!

The EP should also be finding its way onto various streaming services (Spotify, YouTube, Tidal, etc.) over the next few days as well. We're also on track for a fall release of a full album, possibly to coincide with the 20th anniversary of the release of The Red Album...
Posted by Andy at 9:51 AM No comments:


Songs at the bottom!

I'm happy to announce that the Gedankenband have some music releases planned for 2020 after a quiet stretch that only saw the release of the 'Oumuamua/Surf Titan! single. While a full album (provisional title: The Hanging Spaghetto Problem) will likely be an ongoing work through the year with a goal of a fall/winter release, after considering another single release we realized there's enough material ready for a 4-song EP.  Or even a 5-song EP, but I'll probably keep it at 4.

We're shooting for a release of that EP (current title: Found Wanting) in roughly a month. The songs slated for inclusion (running order TBD) are:


While there are some older recordings that may find themselves on the album, all of the EP songs are newly recorded at The Pleasure Grounds over the past month or two, and "When We Look Back To Now" was only written shortly before it was recorded.

As a bit of an amuse bouche, I'll point to two songs. First is an early version of "All Yours", from an attempt at recording it for These are My Monkeys, This is My Circus. This version is kind of over-arranged, using various Garageband loops adapted for its use rather than the more guitar-driven version planned for Found Wanting.  I've been calling this the "Candelabra Version" as a nod to Liberace, who this version eventually reminded me of...   The second is an "acoustic draft" of The DART Song, upon which the final version is being built.

All Yours (Candelabra Version)
The DART Song (acoustic draft)
Posted by Andy at 7:27 AM No comments:

As Happy As You Make Me: Pearl Anniversary


tl;dr: three links at the bottom to different versions of a song celebrating its 30th birthday.

It's been a few years, but I'd like to mark a 30th anniversary of one of my personal favorites, As Happy As You Make Me, written 30 years ago today (according to my notes). I don't remember a whole lot about writing it--I wrote it while on a family vacation in the UK, about the on-again/off-again college girlfriend and original muse I've mentioned here a few times, just as we were ramping up to embark on our longest "on again" stretch (at least officially). This was easily the most challenging original for me to play on the guitar, which I still wasn't really any good at. But Original Muse was very encouraging, and we used to call it "The Spider Song" since my fingers moving around the frets reminded her of a spider walking. I thought I might have the band learn it, but it really wasn't right for them and then I wrote a more suitable song about Original Muse, and that was that. It was in my regular rotation when I'd sit outside my dorm room and play, but I never did the song with any of the bands I've been in, nor was it really an option for any of them. As a result, unlike Down from the Skies or Another Margarita or Solitaire, there aren't a string of recordings of it down through the years.

But as years passed, I've appreciated the song more. It waited until 2009's The Cheese Stands Alone for a Gedankenband version, and while recording it I realized it was a much better song than I remembered. When seriously reconnecting with Original Muse several years ago, The Spider Song was one of her first requests when we were hanging around with a guitar together.  It has worked its way into being something I consider one of my very favorite originals, and trying to be objective about it, likely one of my best. What that says about how my craftsmanship has or hasn't progressed in 30 years is a different topic.

My Decade in Songwriting

Well, it's a time for decadal retrospectives, and I'm no less vulnerable to those than anyone else.

If you're a regular reader of this blog* you probably know that I've been recording music for quite some time with various bands (both actual and virtual). My music with the Gedankenband can be found on Bandcamp and on Spotify.  I've/we've released an album and several EPs in the decade 2010-2019, and I've made a Spotify playlist with the Gedankenband songs that have gotten the most play** over the decade.  But here I wanted to focus on the songs I've written in the decade rather than those released, since a lot of what is on those releases was written in previous decades.

By my count I've got just shy of 50 songs that I wrote in full or in part during the decade. Not all of them are finished, whether they're lyrics but no music or a verse and a half but no chorus, but 47 are close enough to done that I have recorded a version if only for myself.  Of those, 21 have been recorded in a Gedankenband version, though only 12 can be found on Spotify. The others are mostly songs that have been recorded and are waiting for another album/EP release, though a few might not make it out for other reasons.

The remaining 25 are a mix of goofy experiments, songs recorded for friends, and songs that I recorded for myself. Some of them will no doubt make it onto the next album/EP. Some of them will never see the light of day (and that's OK). One of them was written for a terminally ill friend and shared with her before she passed away, I'm not sure what to do with that one.  However, many of them have already appeared on this very blog.

So, for the curious and as a companion to the Spotify list of Gedankenband recordings of 2010s songs, here's a list of the songs that have been released but aren't on Spotify and/or songs that are only found on this blog. I'll link to both the blog post about them (if there is one) and directly link to the file as well. Since some of the older links from the blog posts are broken, the best way to get to the songs themselves are probably the file links below...

As always, enjoy or don't enjoy, it's your call.


*which I think accounts for...nobody?
**which isn't that much, really, but I am grateful for all my listeners. :)
Posted by Andy at 10:28 AM No comments:

The next Gedankenband album is just about ready to go. I've settled on the name This Is My Circus, These Are My Monkeys , as sug... 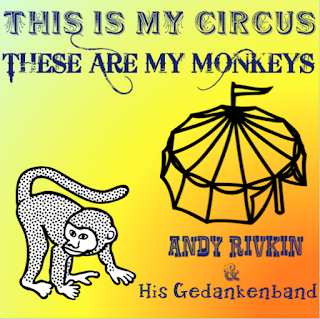 Men Are From Mars/Wrong Place, Wrong Time at Bandcamp

Music is written and performed by Andy Rivkin, with whatever copyright that implies, unless otherwise noted.

I don't mind if you pass on the music. Just credit me. Unless you're sending it somewhere to make fun of me-- in that case I'm willing to remain uncredited. :)

And if you'd like me to take some music down, like if it's a cover song of yours or you were the keyboard player or something, just let me know.